January 10, 2021
In keeping with guidance from local authorities, Luxembourg American Cemetery will partially reopen Monday, January 11. The Visitor Building and Chapel remain closed and no guided tours are offered at this time.

LOCATION UPDATE:  As of Monday, June 22, the Luxembourg American Cemetery is now accessible through a new public bus service. The Luxembourg Public Transport System introduced a new bus line that will run every hour from 10 a.m. to 4 p.m. between the Luxexpo, in Kirchberg, to our cemetery, in Hamm.

The cemetery consists of 17 acres of manicured lawn surrounded by 33.5 acres of woods. The  visitor center, where information and brochures are attainable, is to the left as the visitor enters the front gates. Entering through the gates, the visitor will see the impressive Memorial Chapel encompassed by a stone terrace directly in front of them. The chapel includes massive bronze doors embellished with bronze cartouches depicting military “virtues”, a sparkling mosaic ceiling and a colorful stained glass windows showcasing the Army insignia representing the men and woman that rest in the cemetery.

On the lower level of the terrace, two pylons face each other across a quote by Eisenhower about the sacrifice of military service members.  The pylons display the battle movements in the western European Operations (on the right) and those related to the Battle of the Bulge (on the left). On the reverse of the maps, 371 names of those missing in action are inscribed. Twenty-three bronze rosettes identify service members who have been recovered since the inscriptions were made and now rest in known graves.

Sloping away from the terrace is the cemetery where 5,070 service members lie, many of whom lost their lives in the Battle of the Bulge and in the advance to the Rhine River. The design is a softly curving fan shape consisting of nine sections interspersed with four fountains, majestic trees, and expansive rose and rhododendron beds. It is a befittingly tranquil final resting place for these Americans who gave their all.

The cemetery was established on December 29, 1944 by the 609th Quartermaster Company of the U.S. Third Army while Allied Forces were stemming the enemy's desperate Ardennes Offensive, one of the critical battles of World War II. The city of Luxembourg served as headquarters for General George S. Patton's U.S. Third Army. The cemetery is the final resting place of General Patton.

Dedicated:
1960
Location: Luxembourg
Burials:
5070
Missing in Action:
371
Acres:
50.50
Browse photos, videos, interactive websites and apps dedicated to memorializing those who served in the U.S. Armed Forces overseas. Their service, achievements, and sacrifice are illuminated — dive in to learn more. 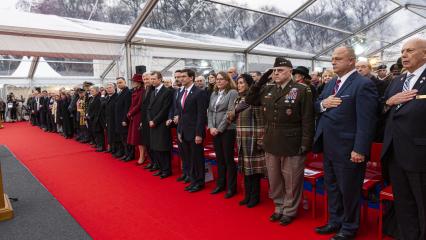 VIEW ALL IMAGES AND VIDEOS
January 10, 2021
In keeping with guidance from local authorities, Luxembourg American Cemetery will partially reopen Monday, January 11. The Visitor Building and Chapel remain closed and no guided tours are offered at this time.

Luxembourg American Cemetery offers free, guided tours. To schedule a tour, contact the cemetery for availability at least 72 hours ahead of the preferred tour time.

Train service is available to and from most European destinations. Travel via high speed train (TGV) from Paris to Luxembourg is about two hours. Taxis are available from the train station.

Luxembourg airport is approximately three miles northeast of the cemetery. Taxis are available from the airport.

The nearest city bus stop (Bus #15) is the second stop past the Hamm church, approximately a one mile walk from the cemetery; the path is well marked with signs. 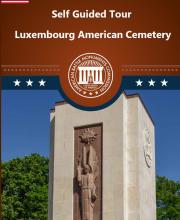 Infographic: ABMC Sites in the World
Download this infographic to see where ABMC sites are located throughout the world.
An Interview with Luxembourg American Cemetery Superintendent

Luxembourg American Cemetery Superintendent Scott Desjardins reflects on the importance of honoring the fallen through his role as cemetery superintendent.

Next of Kin Vicki Cool visits Luxembourg American Cemetery to visit her father's grave for the first time. This video is courtesy of the American Forces Network Europe.