This block is broken or missing. You may be missing content or you might need to enable the original module.

At the Henri-Chapelle American Cemetery and Memorial in Belgium, covering 57 acres, rest 7,987 of our military dead, most of whom lost their lives during the advance of the U.S. armed forces into Germany. Their headstones are arranged in gentle arcs sweeping across a broad green lawn that slopes gently downhill. A highway passes through the cemetery. West of the highway is an overlook that affords an excellent view of the rolling Belgian countryside, once a battlefield.

To the east is the long colonnade that, with the chapel and map room, forms the memorial overlooking the burial area. The chapel is simple, but richly ornamented. In the map room are two maps of military operations, carved in black granite, with inscriptions recalling the achievements of our forces. On the rectangular piers of the colonnade are inscribed the names of 450 missing. Rosettes mark the names of those since recovered and identified. The seals of the states and territories are also carved on these piers.

The cemetery possesses great military historic significance as it holds fallen Americans of two major efforts, one covering the U.S. First Army's drive in September 1944 through northern France, Belgium, Holland and Luxembourg into Germany, and the second covering the Battle of the Bulge. It was from the temporary cemetery at Henri-Chapelle that the first shipments of remains of American war dead were returned to the United States for permanent burial. The repatriation program began on July 27, 1947 at a special ceremony at the cemetery when the disinterment began. The first shipment of 5,600 American war dead from Henri-Chapelle left Antwerp, Belgium the first week of October 1947. An impressive ceremony was held, with over 30,000 Belgian citizens attending, along with representatives of the Belgium government and senior Americans.

Dedicated:
1960
Location: Belgium
Burials:
7987
Missing in Action:
450
Acres:
57.00
Browse photos, videos, interactive websites and apps dedicated to memorializing those who served in the U.S. Armed Forces overseas. Their service, achievements, and sacrifice are illuminated — dive in to learn more. VIEW ALL IMAGES AND VIDEOS
This block is broken or missing. You may be missing content or you might need to enable the original module.

The cemetery is open daily to the public from 9 a.m. to 5 p.m., except December 25 and January 1. It is open on host country holidays. During operating hours, a staff member is on duty in the visitor building to answer questions and escort relatives.

Henri-Chapelle American Cemetery lies two miles northwest of the village of Henri-Chapelle, Belgium, which is four and a half miles northwest of the Welkenraedt exit (seven miles from the German border) on the Aachen-Antwerp autoroute. Welkenraedt, the nearest train station to the cemetery, may be reached by train from Paris (Gare du Nord), Brussels and Aachen, Germany.

Travel via Train
Welkenraedt, the nearest train station to the cemetery, may be reached by train from Paris (Gare du Nord), Brussels and Aachen, Germany.

Travel via Airplane
Brussels is about 80 miles from the cemetery. 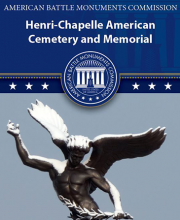 During Memorial Day weekend ABMC sites will pay tribute to the more than 218,000 individuals commemorated at these overseas cemeteries.