November 05, 2019
Renovation work on the Kemmel American Monument near Ieper (Ypres), Belgium, has started and is anticipated to last until early January 2020.

The World War I Kemmel American Monument is six miles south of Ieper (Ypres), Belgium. It commemorates the services and sacrifices of the American troops who, in the late summer of 1918, fought nearby in units attached to the British Army. Some are buried in Flanders Field American Cemetery at Waregem, Belgium, 30 miles to the east.

This small monument on a low platform consists of a rectangular white stone block, in front of which is carved a soldier's helmet upon a wreath. The inscription on the Kemmel Monument reads:

The 27th and 30th Divisions are honored. They served with the British Army from arrival in Europe in May 1918. Their participation in the Ypres-Lys Offensive began when the 30th Division took position in the line on August 18, and the 27th on August 23. The Allied advance began on August 31.

Both divisions met determined German resistance. They moved forward slowly. That afternoon the 27th Division reached the area where the Kemmel Monument stands. They advanced against German forces on September 1 and 2.

The 27th Division was relieved on September 3, and the 30th the next day. Both divisions moved south to the region near St. Quentin. Soon they fought in the Somme Offensive, September 23-30.

Location: Belgium
Browse photos, videos, interactive websites and apps dedicated to memorializing those who served in the U.S. Armed Forces overseas. Their service, achievements, and sacrifice are illuminated — dive in to learn more. 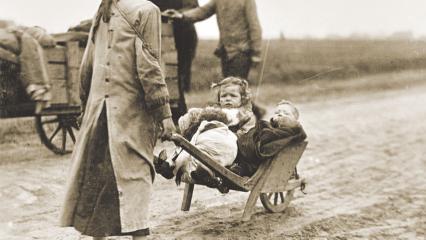 VIEW ALL IMAGES AND VIDEOS
November 05, 2019
Renovation work on the Kemmel American Monument near Ieper (Ypres), Belgium, has started and is anticipated to last until early January 2020.

Kemmel Monument is located outside along the Kemmelberg Road.

Travel by Car
Ieper is 54 miles south of Ostend (Oostende), Belgium, 76 miles west of Brussels, Belgium, and 165 north of Paris. The Kemmel Monument is 1.3 miles northeast of Kemmel on the west side of highway N331.