On this date in 1945, General George S. Patton, Jr. died in Germany of injuries sustained in an automobile accident.

Patton was one of the great figures of World War II, renowned for his style, aggressiveness, and brash quotes. His  success on the battlefield was occasionally interspersed with missteps in the press and in relations with our British allies.

One of the few allied generals with combat experience leading tanks in World War I, Patton led the Western Task Force during the TORCH landings and then II Corps through the remainder of the North Africa campaign. In Sicily, Patton led the Seventh Army, winning the “race to Messina” as his aggressiveness (and some say hunger for notoriety) outpaced the British Eighth Army.

Patton was briefly sidelined after two incidents in Sicily where he slapped and verbally abused soldiers suffering from battle fatigue during visits to field hospital. When the story made the press, there were calls for Patton’s relief, and only the intervention of Gen. Dwight D. Eisenhower and Gen. George C. Marshall saved his career.

Due to both this incident and the preparations for the invasion of France, Patton did not participate in the fighting on mainland Italy, but returned to England. Denied command of the American landing force, Patton still played a critical role in the invasion. As the commander of the “First United States Army Group (FUSAG),” Patton played a key part in Operation FORTITUDE, designed to convince the Germans that the real Allied landing would occur at the Pas-de-Calais. FUSAG was in reality a “phantom army:” an intricately constructed fictitious army of decoys, props, and fake radio signal traffic. The Germans could not believe the main invasion would go forward without the involvement of such an accomplished general as Patton, and kept key formations in the Pas de Calais region even after the D-Day landings.

Patton again returned to combat in August 1944, when the Third Army was activated. After initially clearing the Brittany peninsula, Patton led the Third Army across France, culminating with the capture of the fortress city of Metz in November.

Perhaps Patton’s most famous action came the next month, with the Battle of the Bulge. Patton’s Third Army was south of the main German attack against the U.S. First Army in the Ardennes. When the assault began on December 16th, Third Army was still engaged in heavy fighting around Saarbrücken, Germany. Patton quickly issued contingency orders to begin preparation to disengage and pivot north for offensive operations against the southern shoulder of the Bulge. At a conference with Eisenhower and other senior generals on the 19th, Patton shocked the room by announcing that he could begin his counterattack within 48 hours. By the 26th the lead elements of Third Army had broken through to make contact with the encircled 101st Airborne Division in Bastogne.

Patton continued to lead Third Army through the rest of the war, into Germany and to the Elbe, and remained in Germany during the subsequent. Patton unsuccessfully appealed for a transfer to the Pacific Theater, and when Japan surrendered he was disappointed, writing in his diary, “Yet another war has come to an end, and with it my usefulness to the world.”

Barely three months after the official end of World War II, and almost a year after his heroics during the Battle of the Bulge, Patton was critically injured when the automobile he was riding in collided with another Army vehicle in a low speed collision. Patton struck his head on the glass partition and suffered a compression fracture and dislocation of the cervical third and fourth vertebrae, resulting in a broken neck and cervical spinal cord injury that rendered him paralyzed from the neck down. He died in the hospital 12 days later.

In accordance with his wishes, Patton was buried with his men at Luxembourg American Cemetery. He is the only four star general buried at an American Battle Monuments Commission cemetery, and arguably, one of the most famous. Indeed, while he was initially buried in the middle of a plot like every other service member, the large number of visitors to his grave caused significant damage to the cemetery grounds and the Graves Registration Service moved his remains to their current location at the front of the grave plots (Plot P, Row 1, Grave 1) before turning the cemetery over to ABMC.

While the vast majority of burials in ABMC’s World War I and World War II cemeteries are service members who were killed in action or died during the war, the cemeteries also contain numerous burials of service members who, like Patton, died after the wars ended but before they could return home. Many of these were soldiers wounded during the war who succumbed to their wounds after the peace, but this also includes those killed in accidents in the immediate aftermath of the war and during post-war occupations. For World War I, these numbers were also swelled by the Spanish flu that swept through the ranks of the American Expeditionary Forces in 1918 and 1919. 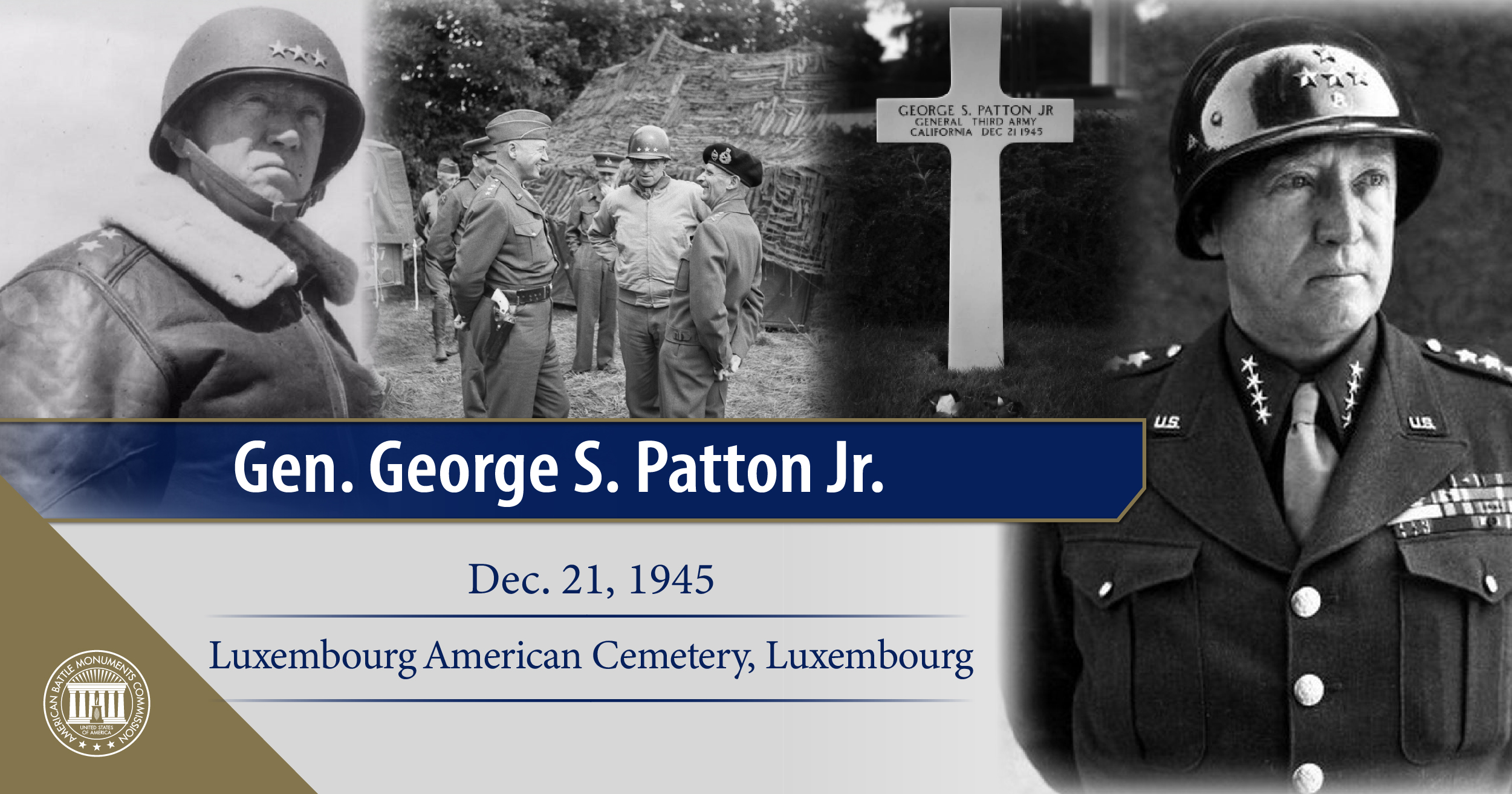