This week, many families around the United States will celebrate Christmas. It’s a holiday that for many, is associated with gathering loved ones close, family traditions and shared meals.

In 1917, many American service members found themselves far from their homes and families for the first time, preparing to join the fierce fighting as part of the Allied Expeditionary Forces of World War 1. Despite that, many of them found ways to mark the holiday with their comrades. 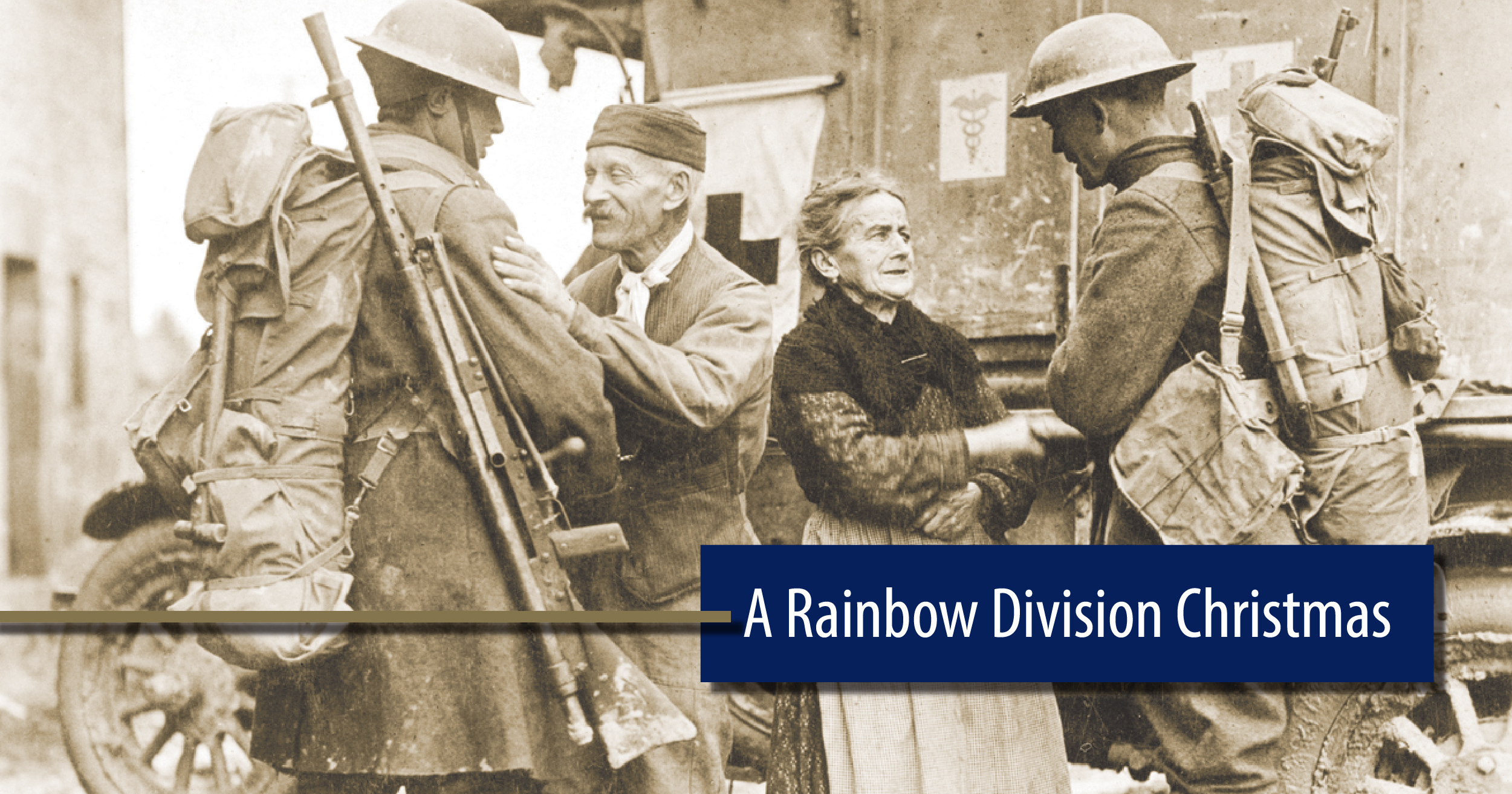 In Dec. 1917, having reached France in November with 27,000 troops, National Guard Soldiers of the 42nd Division had yet to engage in the battles that would make them famous during the war(1).

The 42nd Division had been formed by taking National Guard units from 26 states and combining them into a division that stretched across the country "like a rainbow," to quote Division Chief of Staff Col. Douglas MacArthur. They would become one of the most storied divisions of the war and be involved in major battles(2) including Chateau Thierry(3), where one of the first monuments was built by the American Battle Monuments Commission (ABMC) to remember the sacrifice of American service members in WWI.

By Christmas 1917, the division's elements were stationed in several villages northeast of the city of Chaumont(4), about 190 miles east of Paris. The men had marched there from Vaucouleurs where they had come by train.

The 165th Infantry, formed originally from the 69th Regiment of the New York National Guard and often referred to as the “Fighting 69th” or the ”Fighting Irish” celebrated Christmas 1917 in the village of Grand. Father Francis Duffy, the regiment's chaplain (played by actor Pat O’Brien in a 1940 Hollywood movie),(5) held a joint American-French mass. According to Sgt. Joyce Kilmer, a poet and editor who died during the Great War on July 30, 1918, and is buried at ABMC’s Oise-Aisne American Cemetery (Plot B-Row 9-Grave 15): "the regimental colors were in the chancel, flanked by the tri-color. The regiment was also joined by some French soldier-violinists. A choir of French woman sang hymns in their own language, the American Soldiers sang a few in English, and French and American joined in the universal Latin of ‘Venite, Adoremus Dominum.’" On Christmas Day, the men ate what looked like a banquet: turkey, chicken, carrots, cranberries, mashed potatoes, bread pudding, nuts, figs and coffee. According to Cpl. Martin Hogan, the Army "was a first rate caterer."

The 168th Infantry, from the Iowa National Guard, hosted 400 French children at a Christmas celebration in the village of Rimaucourt. Two American soldiers dressed like Santa Claus and gave presents to the French children. In addition, a French band played the Star-Spangled Banner. As Lt. Hugh S. Thompson recalled in his book "Trench Knives and Mustard Gas," the kids received dolls, horns and balloons. The 168th was not as lucky as the 165th on Christmas day, according to Thompson. They ate "scrawny turkeys and a few nuts were added to the usual rough menu".

The 166th Infantry from the Ohio National Guard was reviewed by Gen. John J. Pershing just before Christmas. On Christmas, they enjoyed music from the regimental band and a good meal.

While Christmas 1917 was as good as any holiday can be for service members far from home, the next week for the Rainbow Division was quite different and was known as "The Valley Forge Hike." (6)

It was 30 to 40 miles from where the division's troops had celebrated Christmas to the town of Rolampont, where the U.S. Army's Seventh Training Area had been established. What is today a one hour drive, took four days for those service members to march in 1917. It was even qualified as a miserable march, according to the 1919 book, "The Story of the Rainbow Division." The soldiers had "scarcely any shoes except what they had on their feet, there was no surplus supply to speak of. Some of the men had no overcoats." They walked into a mountain snowstorm and some faced food shortages during their march. In some places, the snow was three to four feet deep. Soldier's shoes wore out. Some walked almost barefoot, leaving bloody trails in the snow.

As the 165th Infantry arrived, the regimental band played "In the Good Old Summertime." By New Year's Day, the division's elements had arrived in Rolampont and enjoyed a brief respite, unaware of the challenges and heavy fighting that 1918 would bring.  In late July 1918, the 42nd Division went on the offensive near Chateau-Thierry. That was the first of several engagements that summer which would lead to heavy casualties. Replacements arrived in August and the Rainbow was integral to the first all-American offensive of the war at St. Mihiel.(7)

For some of the American soldiers, including many in the Rainbow Division, their Christmas celebrations in France in 1917 would unfortunately be their last. Their sacrifice directly contributed to the end of the war by November 1918. In December of that year, newspapers were already reporting that some servicemen would be arriving on homecoming ships in time for the holidays through holiday messages if not in person.(8)

While those that could returned home, the United States was already working to remember its fallen and honor their sacrifice. That commitment led to the formation of ABMC in 1923 and our continued dedication to honor our fallen by maintaining our overseas cemeteries and our memorials to pristine standards to ensure “Time does not dim the glory of their deeds.”

(4) Chaumont is also known for hosting the World War I Chaumont Marker, a bronze plaque located at the entrance to Damremont Barracks in Chaumont, France. It signifies the location of the general headquarters of the American Expeditionary Forces (AEF) of World War I commanded by Gen. John J. Pershing. Its inscription in French and English reads as follows: “General headquarters of the American Expeditionary Forces in Europe during the World War occupied the building of the Caserne Damremont from September 1, 1917 to July 11, 1919 and from here directed the activities of more than two million American soldiers”.