Cambridge American Cemetery is the only WWII military cemetery located in the United Kingdom. The graves of more than 3,800 WWII fallen are taken care of by our dedicated staff members: gardeners, maintenance workers, and administrative staff members. Among them is Suzie Harrison, interpretive guide for nearly six years. We asked her to tell us more about her working at the American Battle Monuments Commission.

What does it mean to be an interpretive guide at ABMC? Can you tell us are your main responsibilities are at Cambridge American Cemetery?

At Cambridge American Cemetery my role as an Interpretive Guide is not only to lead tours for schools, academics, and tourist groups, but also to implement other aspects of our outreach program. We offer tailor-made sessions on anything from The American Red Cross to Developments in Technology during WWII. Historic research takes up a lot of my time. I also help with writing scripts for our ceremonies, as we always try to make them thematic such that every occasion is special and individual.
Most of all, my role here at Cambridge American Cemetery means that I get to tell the stories of all those who are commemorated here: not just those “more” famous, but also of the ordinary women, soldiers, sailors, and airmen who gave their lives in a quiet, understated way – just doing their job. After all of these years, we stay true to General Pershing’s motto: “Time will not dim the glory of their deeds.”

What motivated you to join ABMC?

I was already interested in the Americans in WWII, as I previously worked as the Learning Officer at the American Air Museum, Imperial War Museum (IWM) Duxford. Every year I organized visits to Cambridge American Cemetery for American Educators who came to the U.K. for the AAM Summer School, and so was very aware of the work done here. When an opportunity came up, I did not hesitate to apply. 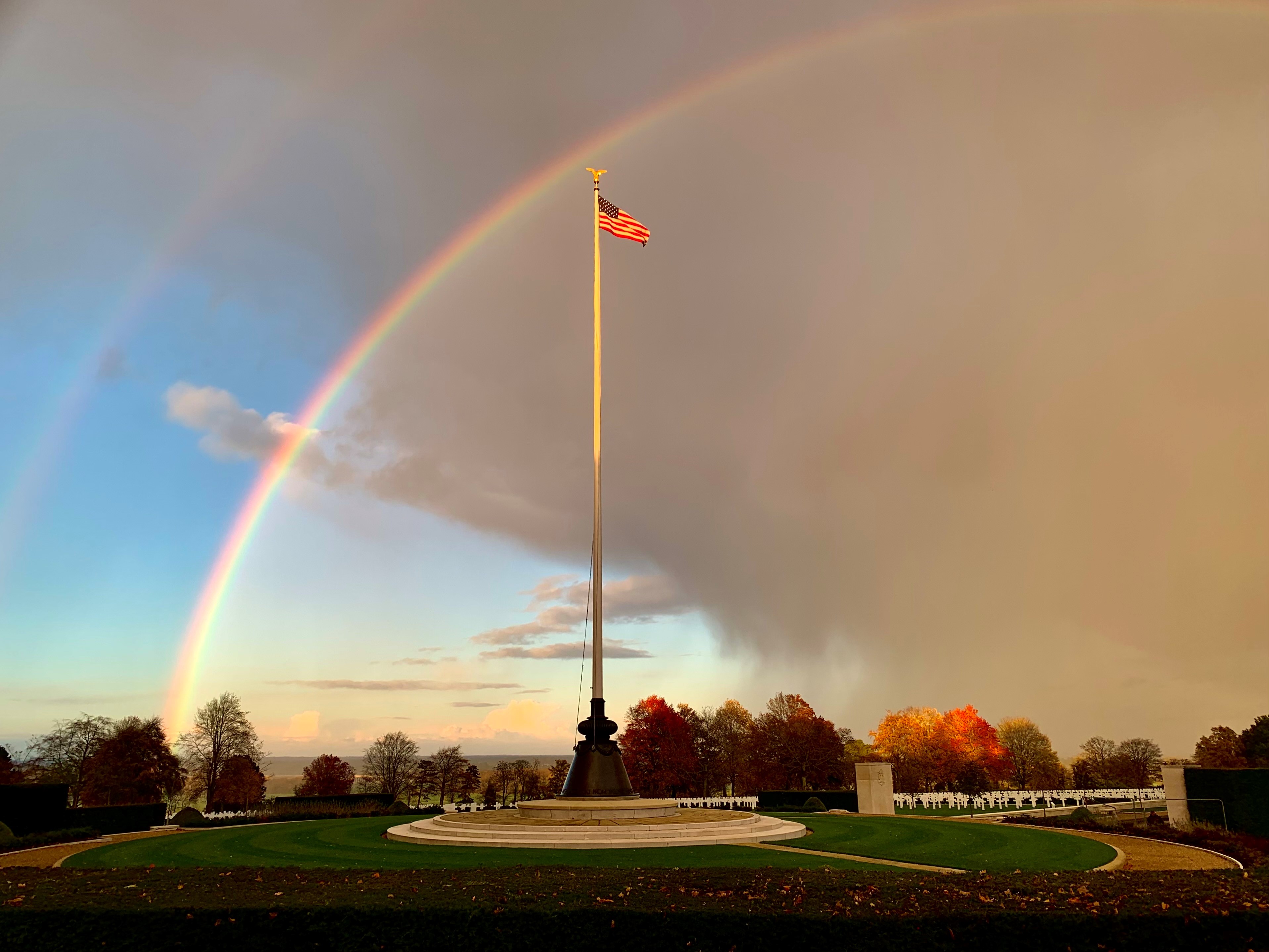 You recently took a particularly stunning photo of the cemetery overshadowed by a double rainbow. Can you tell us more about the day you took the photo (when was it, what happened that day, etc.)? What made you took that photo at that moment?

The day that I took the series of photos, we had been dodging showers all afternoon. I was dashing to my car hoping to avoid the next cloud burst, when I saw the rainbow – there were two! The cemetery looked so beautiful that I dropped my bags and started taking photos around the site.

Is there one story that you have a personal connection to, or that looks very special to you, at Cambridge American Cemetery?

I think that the first story that you learn, through engagement with a family, must always have a special place in your heart. A few months after I had started work, a group of next-of-kin asked to be shown the grave of Joseph W. Heacock, Jr. Over my nearly six years at Cambridge American Cemetery I have hosted various branches of the family – they are always interested to know who I have met on previous occasions. I love Joe’s story and tell it often, always highlighting the fact that he never knew his son. A few years ago, I was lucky enough to meet his son, who like the rest of the family, was moved to know that we share Joseph’s story in our tours. I certainly find it very emotional and poignant when I meet members of the Heacock family. It reinforces for me why I work at Cambridge American Cemetery.

Joseph Wilson Heacock, Jr. was the youngest of six children born to Joseph W. Heacock, Sr. and Fanny Knowles Heacock. Joe, Jr. came into the world on July 27, 1919 in Edinburg, Texas, literally to the sound of music: two of his sisters, a brother, and his father were playing "Woodland Echoes" on cornet, clarinet, violin, and piano.

In October 1940, at age 21, Joe and a friend, Marvin G. Jones, enlisted in the 141st Infantry Regiment of the Texas National Guard. Two months later, the unit was activated for service in the U.S. Army as part of the 36th Division, a unit in which his older brother Richard had served during World War I.
The year 1942 would be an important one for Joe Heacock. First, he took leave from the 36th Division long enough to go home and marry Dorothy Louise Hager on February 8, 1942. In July, he was accepted in the Aviation Cadet program and transferred to the Army Air Corps. On November 13, 1942, his son Gary Wilson Heacock was born.
After completing primary and basic flight training, Cadet Heacock took advanced flight training at Brooks Field, San Antonio. Upon completion of advanced flight training, he received his wings on March 20, 1943.
Second Lieutenant Heacock was assigned to the 33rd Photographic Reconnaissance Squadron in January 1944 as the unit was arriving at Will Rogers Field, Oklahoma for preparation for overseas movement (POM) training.
Heacock was promoted to First Lieutenant and during a unit reorganization, he was made leader of Flight C. He flew his first combat assignment (sortie 33/489) on May 27, 1944 -- a high-altitude mission photographing Luftwaffe airfields in upper Normandy.
By June 22, Heacock had managed to accumulate ten combat missions, which made him eligible for the Air Medal. He was the third pilot of the 33rd PRS to reach double digits in combat sorties.
On July 6 the squadron launched 27 combat sorties. That day, Joe Heacock flew F-5E #43-28302 on sortie 33/1107, a successful bomb damage assessment mission around the town of Mayenne, an important rail and bridge center for Nazi communications.
The next day, July 7, Lieutenant Heacock took F-5 #302 up again, this time on a non-combat photo test hop. In the afternoon, he crashed in a wheat field next to an aerodrome. The official accident investigation reported the following:
The pilot made a normal take-off from Station 102 at 1528B and circled to the left. He buzzed the field close in the direction of take-off and was seen to make a steep right turn at low altitude, disappearing from sight of the control tower behind a low hill. The plane crashed in a field near the aerodrome at approximately 1536B headed toward the aerodrome.
A week after the fatal crash, Heacock was posthumously awarded the Air Medal.